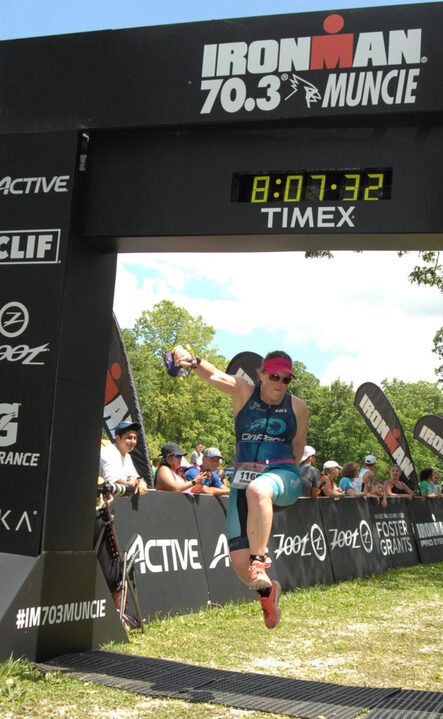 It all started with The Stress Fracture. Well, actually it started with two nurses I worked with asking me to walk a half marathon. Despite (or perhaps because of) being in nursing school, I was at my heaviest at 210 pounds. That’s a lot on a 5’ 2” frame. I was coming off a Christmas that included crying to my future husband that I was tired of being short of breath just putting on my shoes. In 2009, I walked 13 miles and ran the last tenth of a mile to the finish line at Lewis & Clark Half Marathon. A spark was ignited.

For the next four years, I worked tirelessly to get ever faster. In 2013, PRs abounded. Less than a year after birthing our daughter, I ran eight halfs, three of them in October. Ah yes, that spark had grown into a raging forest fire.

After months of running through increasing pain, I confronted my fear and saw my sports medicine doctor. I had given myself an anterior cortex stress fracture in my right tibia. The doctor called it the worst kind of stress fracture. He shut down my 2014 season before it ever began. “Fine, what can I do?” I asked him. Thus began my self-training for a century. After nine months of biking and achieving my century goal, I saw the doctor for my monthly stress fracture assessment. When he informed me the fracture was still not healed, I said, “Fine, what can I do now?” His answer: Swimming. Now that I had confronted my fear of road riding, The Universe wanted me to work on my swim anxiety. “If I have to swim, I might as well do a triathlon,” I told him.

The rest of my story is a cautionary tale in how self-coaching can get you to the finish line … with some lonely mediocre training as well as physically and mentally painful racing. In hindsight, I feel blessed to have survived solo open water swims without a safety buoy and solo long rides with inadequate hydration  and fuel. I distill my learning experiences down to two things: Respect the distance. Get a coach.

Beyond my running experience and my decade long nursing career, I have participated in sprint, Olympic and half-iron triathlons. My current goal is Ironman Louisville in October 2018. Triathlon has challenged me mentally, physically, emotionally and personally … and the rewards have been amazing athletic and personal growth. This sport has truly become both my passion and my career. I am in love with the triathlon lifestyle and love to train, race and better myself each and every day. People often say to me, “I don’t know how you do it. You’re a mom, a wife and you train for triathlons?!?” My answer is simple: You too can do this. And yet it’s not that simple at the same time. My husband is supportive of my goals both as an athlete and as a coach … and that has made this adventure possible. It’s not easy, but then everything worth having in life is not easy.

DESIGNED AND MAINTAINED BY: WWW.WALTONKRISTINEDESIGNS.COM